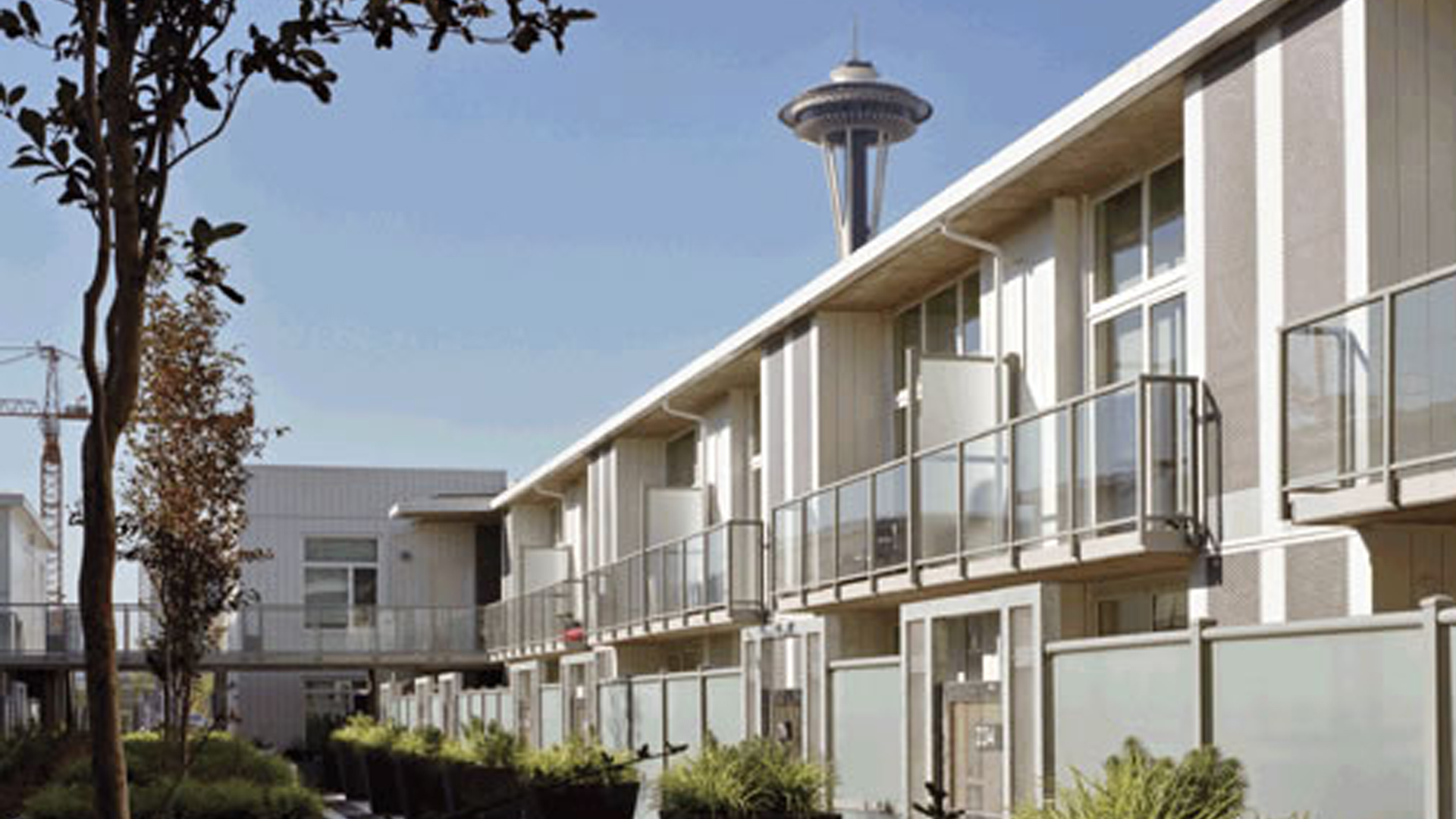 Granted, the floor plans are small, but the style, craftsmanship, and experience of living at LUMEN won’t be topped. Many condos in Seattle attempt to miniaturize the suburban experience- people are encouraged to haul their armoires and sofa sets into tiny spaces. At LUMEN, we’ve done the opposite. Our philosophy is, you’re going to have a smaller space, so let’s redesign how you live. Instead of having a boxy kitchen that takes up a 10x 10 space in your 50x 50 unit, now your kitchen is organized in a row, so you gain a third of that space back. You are living in the middle of a vibrant city, coming and going constantly, so you want a place that’s clean and uncluttered. Our minimalist design, exacting standards and attention to detail have created units that stimulate dynamic people. It’s not complicated to do great design- sometimes it’s as simple as barring contractors from using felt pens, so the concrete ceilings are pristine, or installing self- closing bathroom drawers. We went to extraordinary lengths to execute basic but important design concepts. To give one  example: An outdoor patio should flow naturally into the indoor space. When you throw open your doors in the summer, it should feel like you’re doubling your living space. But in most condos, there’s a step between the interior floor and the patio, to prevent water intrusion. The whole notion of the continuous floor is lost.  Not at LUMEN.

We spent thousands of dollars sinking the patio’s concrete slab, then placing tiles on top, so the indoor and outdoor surfaces are, to naked eye, level. It’s a simple detail, but an important one. In other cases, we had to splurge to get the design we wanted. The NanaWalls glass doors that separate the interior from the patio- cost $9,000. But since they essentially disappear when you close them, they were the only solution that provided the seamless look between indoor and outdoor that we needed. People who buy LUMEN units realize that they aren’t going to get a suburban home reconfigured in the city. They embrace the fact that their lives will be a little different. And this style of living draws similar people. They may be of different ages and backgrounds but they share an affinity for design and a youthful dynamism. It will be an interesting experiment to have all these like- minded people living together. We asked designers from Roche- Bobois, Kasala, Lighting Universe, and container Store to design model units for the LUMEN open house. It was thrilling to see their expressions of these spaces. Within this booklet, they explain their design choices. 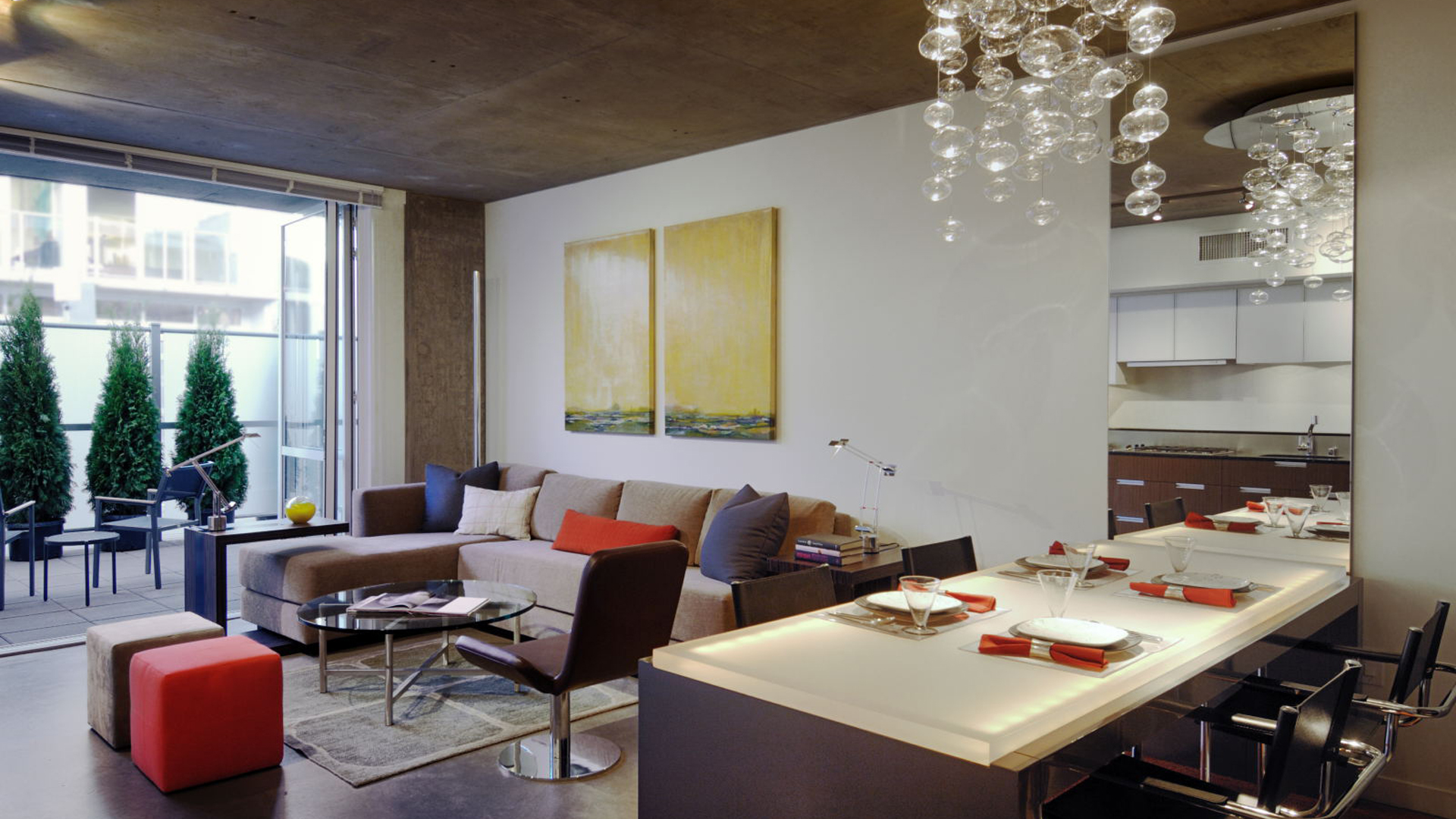 What steps did you take to maximize the space?
There are some tricks of the eye that you can do. I’ve put a mirror behind the long dining table to make it look twice as long. The raumplus sliding door system that separates the living space from the bedroom- when you open these doors it adds more space to the living area. We also added some artwork by Matthew Olds, a young up- and- coming artist. He’s doing atmospheric artwork right now, which really fits.

Does the neutral color of the walls also help?
Yes, this is one of the smallest units, so putting in a bunch of colored walls would really close in the space. In a larger space you might define a few areas by doing a feature wall, but here it would seem too busy. Also, there are a lot of see- through spaces,so if you painted one wall, you’d probably feel like you had to paint the wall that sort of connects to it, and then where would you stop?

How did you choose the furniture for the unit?
Everybody has a different idea of comfort, and when I design custom furniture for a client, my goal is to create what’s comfortable for them. Here I was thinking about what would best maximize the space.

What about storage?
There are optional upgrades for this build-in storage: you can put in a desk or a bookcase, or fill it with camping supplies whatever maximizes your lifestyle. The bed had a hydraulic system that lifts up the mattress, there’s room for storage underneath the mattress. Garret Cord Werner is the designer of LUMEN and Principal of Garret Cord Werner Interior Design.