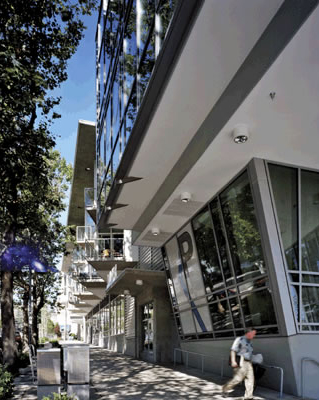 While the convenience of these lifestyle centers are attractive, homeowners still choose their particular home based on its design and ultimately it price. As urban housing costs have increased rapidly, developer vie to build more efficient spaces, yet still feature the same or better living experiences. According to Jones, the market is changing. Developers have built more value into today’s condominiums, he says. They are providing better finishes, more unique features and more appealing amenities. What you find in new construction today was not available before. The re-sale market no longer competes on the same level with new construction as it once did- there’s a measurable difference.

Case in point, one up-coming development in lower Queen Anne will cast new light on the subject of design. Located on the former site of Tower Records, construction has commenced on the condominiums and retail center at 500 Mercer. Developers say the project is similar in concept to University Village, rather an urbane version. The project will feature a 40,000 square foot, full-service urban grocer, restaurants, and a variety of upscale retail. Well timed, the project’s three-story glass storefronts will soon grace the landscaped, two-way boulevard planned for Mercer Street connecting Seattle Center to South Lake Union. Its’ architecture, comprised of concrete, steel and glass promises to make an iconic statement, says David Hewitt of Hewitt Architects, principal architect for the project. The expansive use of glass and translucent materials will enliven the streetscape and provide a real sense of connection to the surrounding neighbor-hood.

In addition to air conditioning and other thoughtful features, Hewitt adds that the full-block community will also feature a generous homeowner amenity pavilion at Fifth and Mercer. This two-story, glass walled jewel box will showcase a fitness center, community kitchen and dining spaces, meeting spaces, business center and a home theatre entertainment room for its residents, all with sweeping views of Downtown Seattle and Seattle Center. The 100 residences will be known as LUMEN, so names for their inspiring interplay of light and space. Interior designer Garret Cord Werner explains the vision for the community as light meeting form. The homes are being designed in such a way as to allow for individual expression and flexibility, all within a gracious, light- filled space, shared Werner Working with Hewitt Architects, the development team fashioned the open-plan homes so they could be flexible and evolve as desired by the owner. When complete next year, LUMEN will have provided construction excellence will have provided construction excellence with a bold design sensibility, says developer Alan Winningham of Landstar Real Estate. Most importantly, we will do so while maintaining affordable prices. It’s just what the market has been missing and we’re building it.