Bigger is not always better. A Faberge egg is only a few inches high, but you won’t find an object with a more refined pedigree. Exaggerations in scale, however, and subtle manipulations of proportion- the relationship between the sizes of things- can produce the drama that we associate with glamour. There is little doubt that Michelangelo’s David is immortal partly because it towers above us and the hand that threw the giant- killing stone is more massive relative to its arm than it would be in life. In the world of interior design, it is often more desirable to create a room from fewer, larger pieces than to fill it up with bits and pieces. Upping the scale of the objects-painting with large brushstrokes , as it were-tends to make rooms seem grander than their proportions, no matter how large they are. Playing oversize objects against normal or even undersize pieces can make spaces seem taller or wider, more or less open.

Big pieces command attention the way a real movie star does on a red carpet crowded with lesser celebrities. “Grand” objects can create focal points, organize a room, draws focus, state or recapitulate design motifs, create architectural gravitas, and imbue a room with a gratifying sense of abundance and largesse. They are often also a great deal of fun. The gallery-scale photograph of horses by Roberto Dutesco on the wall of building contractor Jim Dow’s renovated lower-level family room in Seattle creates a sense of grandeur while it establishes a masculinity common to all the rooms and reflects the home’s earth-toned color palette (interior design by Garret Cord Werner). 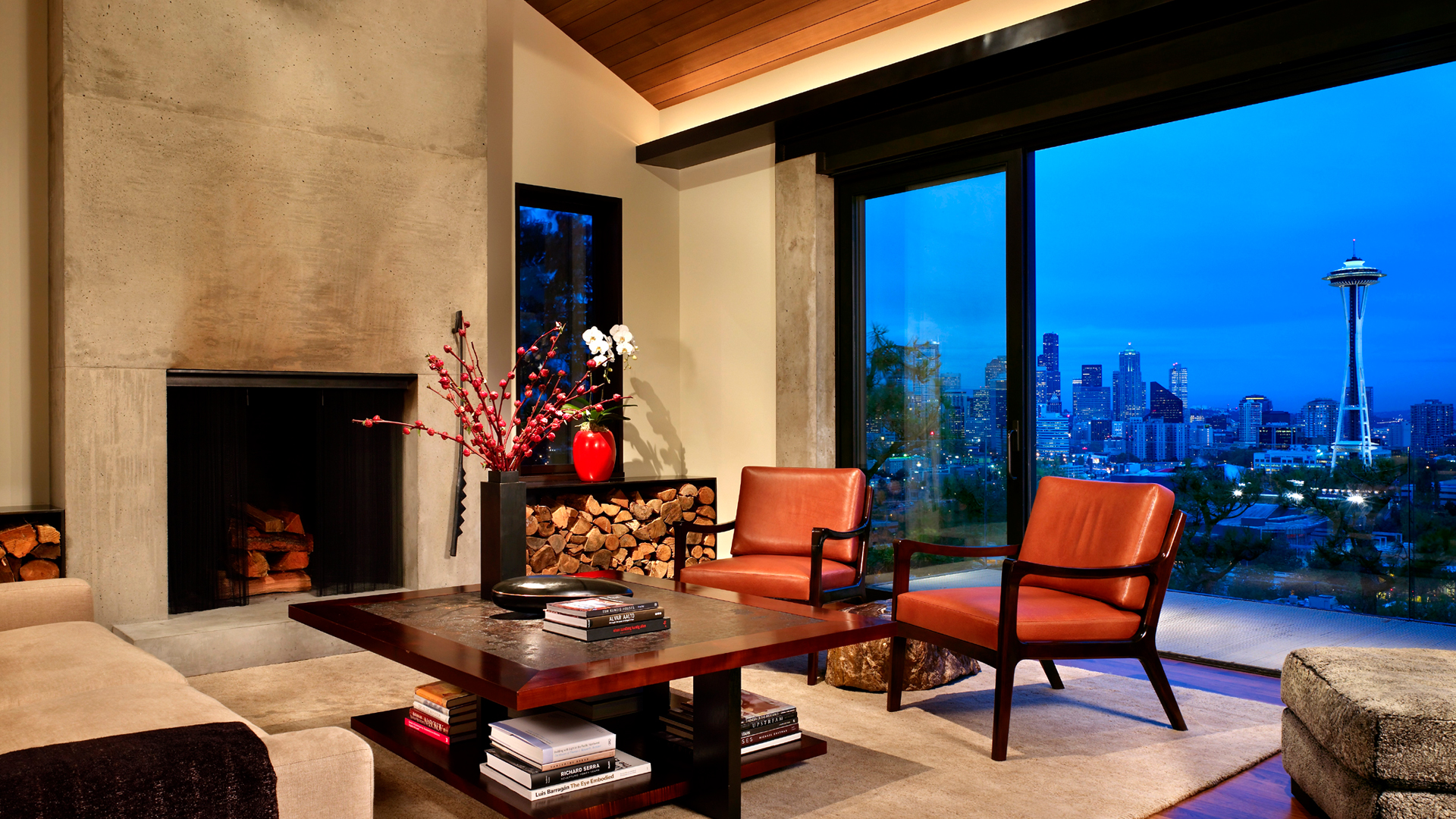 My real estate agent will tell you: Home buyers love fireplaces. Fireplaces are the new spa bathrooms of the real estate world. It’s not surprising. Who doesn’t look good sitting around in the warm glow of firelight? Ever since our prehistoric ancestors figured out that a hole in the roof was a good way to keep the fire from filling their cave with smoke, fireplaces have played a core part in the design of homes. For centuries, homes affluent enough to have one were built around the fireplace, since it provided warmth for the family as well as a convenient place to braise the evening brisket. There seems to be something universal in the appeal of fire, which, after all, is one of the four basic “elements” (water, air, and earth being the other three).

Virtually all new upmarket homes have fireplaces, as do many renovations. One of the great things about them is that, once you’ve installed the actual mechanism of the firebox, your fireplace surround can be almost anything you want it to be, from adobe to stainless steel, from brick to Corian-and it can change whenever your decorating style evolves. Wherever you install your fireplace-living room, bedroom, kitchen, or bath-the space becomes instantly more inviting because it invites you to spend some quality time. Contractor Jim Dow’s masculine Zen makeover of his Seattle home brought new materials and streamlined detailing to the most standard building components. In the living room, he used blackened steel for the frames of new windowson each side of the soaring fireplace and again on the log boxes he devised for storage. 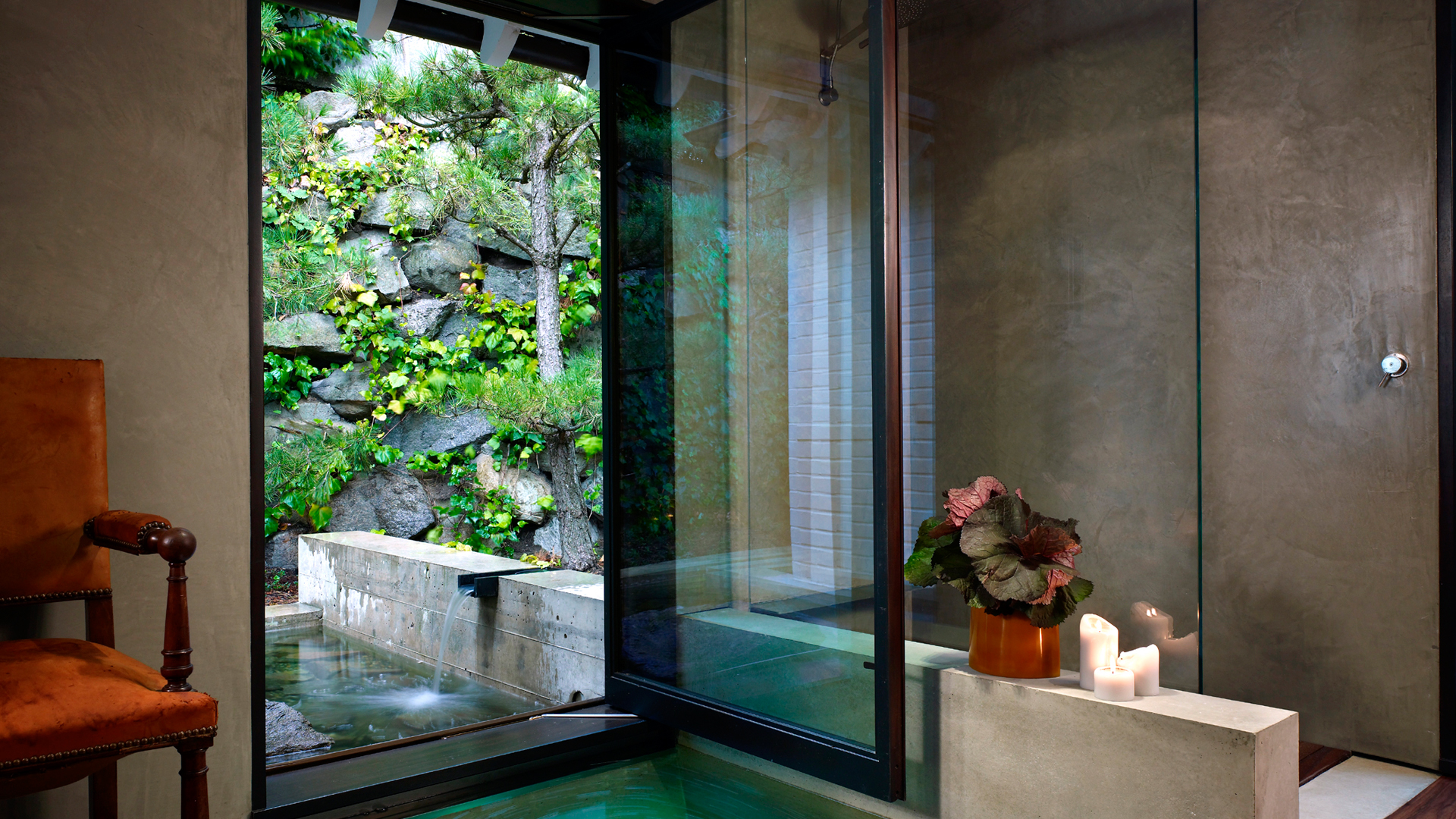 No room of the house has made a more dramatic transformation over the last century than the bathroom. Call it the home’s biggest splash. From a closet retrofitted with a commode, the salle de bain has become a spacious, spa-inspired playground for adults. Without a doubt, bathroom fixtures-from tubs that look like bathing vessels for Cleopatra to vessel sinks that are carved, cast, and molded into shapes never before seen outside MoMA-have practically become pieces of design art (and at the prices they fetch, they should only be as good an investment). Although no room has a more practical rationale, none offers such endless possibilities for sybaritic invention. The bathroom is nearly a blank slate.

Now the size of the average postwar living room or larger, today’s wish-fulfilling bathroom would doubtless stun the Levitts of the world, whose mass-produced homes had six-by-eight-foot family bathrooms, about the size of a latter-day toilet enclosure. Bathrooms incorporate walk-in closets and dressing rooms and boast all the  accoutrements of a hair salon or country-club locker room-plus faucets that gleam like tiaras. The newly glamorous bathroom may retain ease of maintenance, but it does not limit the design imagination. For a master bathroom that feels like a vacation, Seattle contractor Jim Dow installed a custom-made, concrete Japanese soaking tub at floor level. The enormous window next to the tub opens onto a matching pool in a privacy garden that makes bathing seem like an outdoor activity. A glass wall separates the adjacent shower stall.