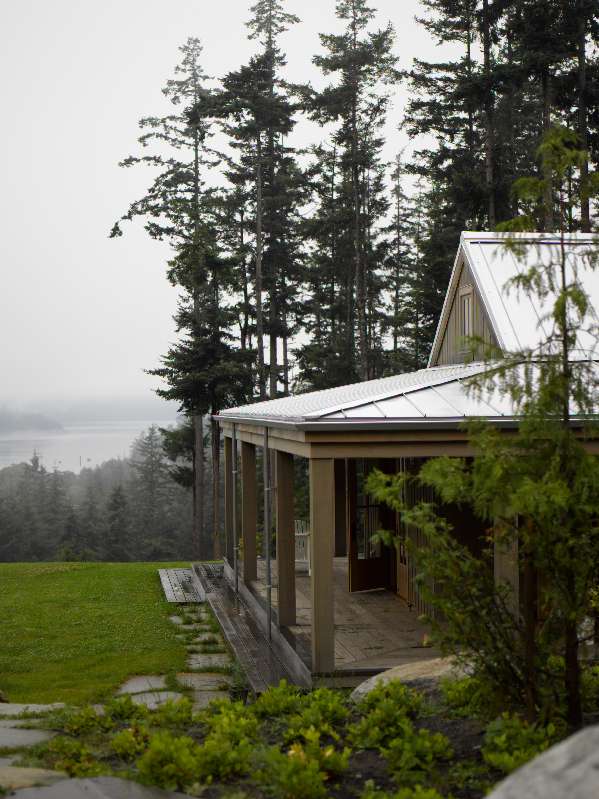 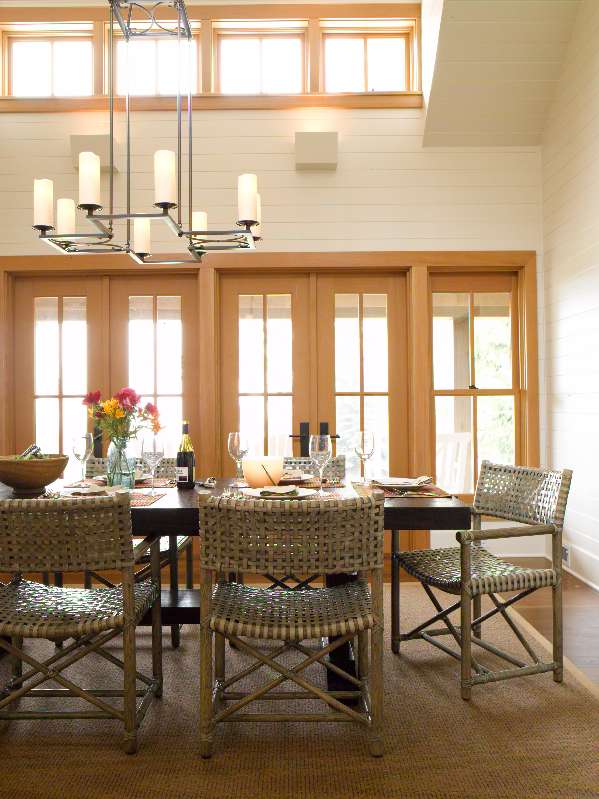 The exterior of the main house was stained a weathered gray to blend with surrounding cedar and Douglas fir trees. They look as though they’ve stood forever in this lush Northwest forest. Half a dozen structures, as discreet and dignified as graying sheds, peek from evergreen boughs on a 25-acre compound overlooking the waters of Puget Sound. Instead of designing a single home for his client on this remote island off the Pacific Northwest coast, architect Steve Hoedemaker of Bosworth Hoedemaker, a Seattle firm know for refined understatement, created a hillside grouping of small buildings- a central house for meals, and outlying  buildings for sleeping, reading, and cookouts. The property contains six modest wooden cottages ranging in size from a small writer’s hut to a renovated barn, half hidden among the alders and firs.

“We didn’t want an overgrown, bloated house,” says the homeowner, who planned the property as a place where he and his wife could gather with their friends, four grown children and a first grandchild while maintaining the ability to have quiet downtime. Interior designer Garret Cord Werner designed and custom-made the sofa and club chairs in the living area of the main house. Natural light washes down from a double row of clerestory windows to the dining area below. The rattan chairs with backrests and laced rawhide seats are from McGuire; the table and chandelier are Garret’s custom designs.

As with all good home design, the buildings are a response to a specific place, “We live in a part of the country that’s blessed with temperate weather,” Steve says. “The thing that makes this vacation property unique is interacting with the outdoors on a regular basis. If you want to go back to your bedroom, you encounter nature along the way. It’s like camp.”

To be sure, the family compound has all the rustic charm of old-fashioned cabins, complete with a timber-framed pavilion, Adirondack chairs, and outdoor fireplace, but without the usual dark rooms or the rough-hewn clutter. 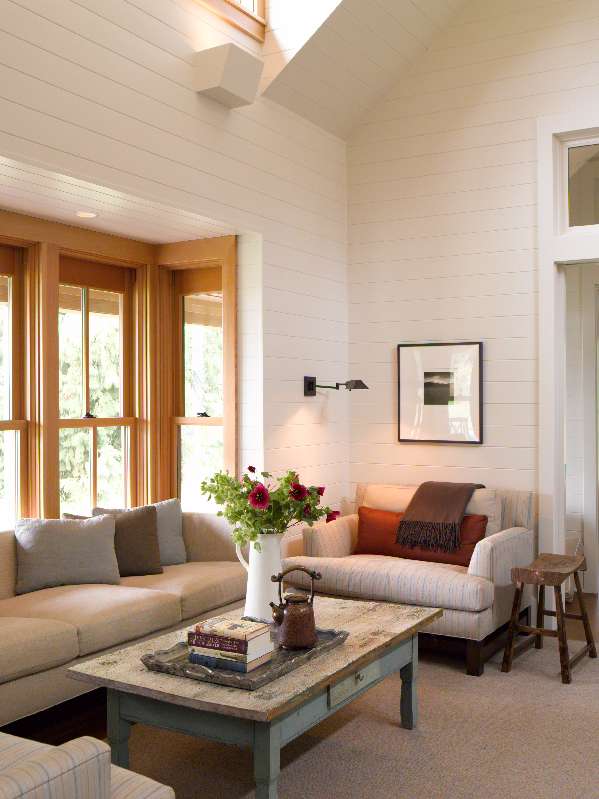 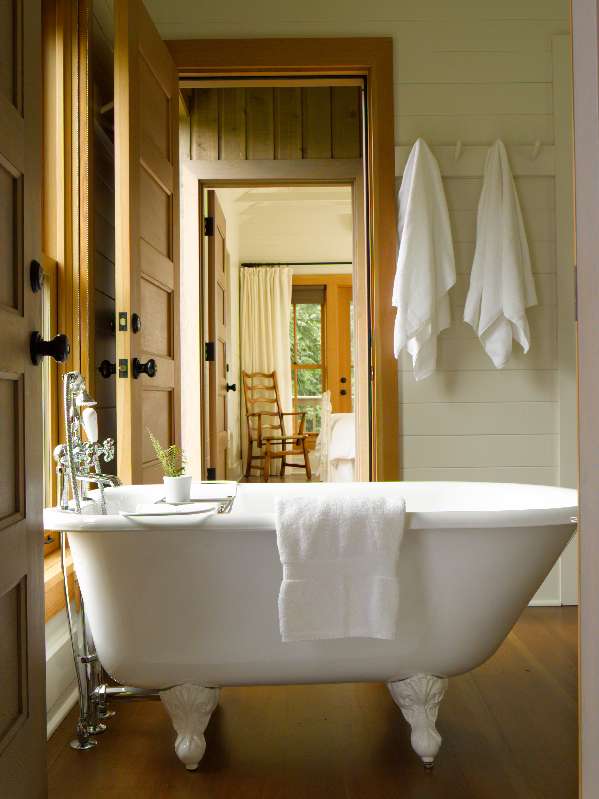 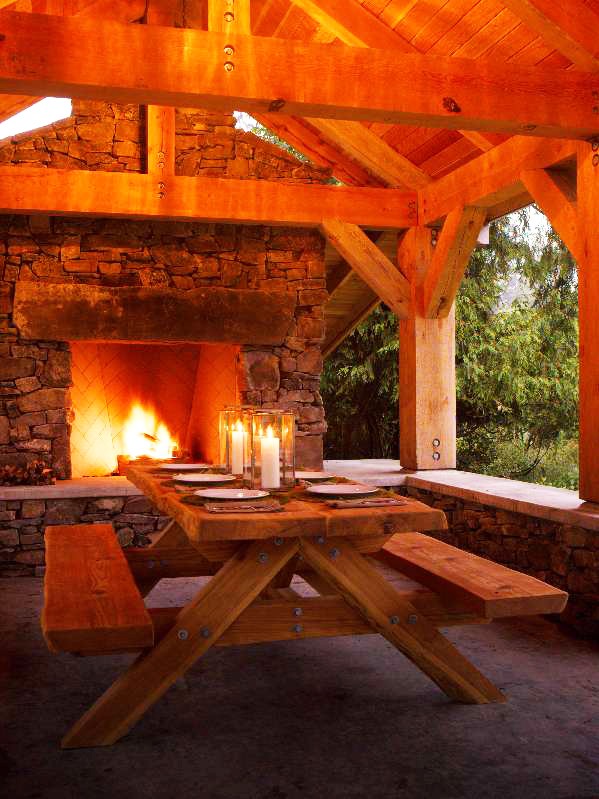 “We did not want cabin cliché,” says the homeowner. “We wanted clean lines and brightness.” Seattle-based interior designer Garret Cord Werner made the rooms faithful to their rough-edged setting without resorting to predictable kitsch. In the main house, where the kitchen and the dining and living spaces line up in the  manner of a shotgun house, he painted the woodpaneled walls a basic white to amplify wan Pacific Northwest sunlight streaming in from clerestory windows that are positioned high up in the loft ceilings. The picnic pavilion, constructed with lumber salvaged from the site, features a stone hearth. A local carpenter built the cabinetry and kitchen island. The counter tops are gray soapstone. The compound includes a mix of places for quiet seclusion, such as the 10- by 10-foot writer’s cabin and family gathering, like the cozy inglenook. The mood shifts abruptly from the bright dining area to the tidy fireplace alcove with its built-in seating. It’s an old British convention known as an inglenook, with walls that are composed of a rough assemblage of rubble and ledge stone. This warm sanctum, furnished with pillows and blankets, becomes a gathering spot on cooler weekends.

“The inglenook makes a bigger statement as a rustic insert into an otherwise airy interior,” says Garret. Most of the home’s furniture, with the exception of a vintage coffee table, was custom-made by Garret’s office. The  master bedroom resides in its own cabin. A bath in the guest cabin contains a roll top claw foot tub from Sunrise Specialty. For the linen upholstery, he chose light neutral tones complemented by pale blue stripes. The interior echoes the simple lines of the architecture, with no skirting, no drapery, no flourishes.

“Everything is very linear and symmetrical,” Garret says. “We wanted the look to be serene and sophisticated, but not so  sophisticated that the house would seem out of place.” The furnishings are all the more pleasing given the remoteness of the setting, as though the compound were an outpost of comfort and taste on a watery frontier. A private water taxi makes several trips a day to the island, but the family also enjoys the flexibility of their own 25-foot catamaran. They reside well out of sight of their neighbors, but they can still see boats  passing in the distance. The view, composed by landscape architect Kenneth Philp, extends from a meadow framed by the forest to the expanse of water beyond. Days are spent kayaking, gardening, or just relaxing.

At mealtime, the family gathers on the main house porch. When dinner winds down and the dishes are done, the group adjourns down grass paths to the two separate sleeping cabins tucked among the stands of trees. They are alone in the hush of the forest edge, but they are always one meal away from a happy reunion.